This applies to ASCE 7-05 Fig 6-6 as well as ASCE 7-10/16 Fig 27.4.1.  MecaStack reports extremes for the roof MWFRS pressures, and there has been a change in the way that is now handled.  In v2286 and earlier, the software only considered the Cp_max values when calculating pressures.  For example, Fig 6-6 shows two values of Cp, in this case below -0.18 and -0.9.  For the MecaWind output only the bigger value Cp = -0.9 was used, and the pressures reported. 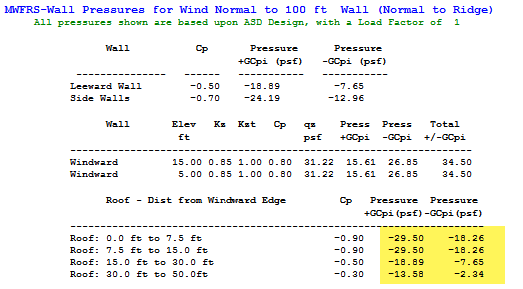 After further research, a note was found in an ASCE 7 reference that indicated that the smaller uplift pressures on the roof can become critical when wind load is combined with roof live load or snow load.  Therefore in the > v2286 versions of MecaWind we now report the maximum uplift as well as the minimum uplift, so that this extreme case can be accounted for by the designer.    Here is the same set of calculations in the new version of MecaWind.

C
Chris is the author of this solution article.

Did you find it helpful? Yes No

Send feedback
Sorry we couldn't be helpful. Help us improve this article with your feedback.